As an author of speculative fiction, I constantly imagine and dream of new worlds. Magic is something fun to write about, and to envision. Yet, occasionally I encounter something in nature that is more magical than anything I've dreamed. Such sights fuel imagination, stirring creativity to new levels. 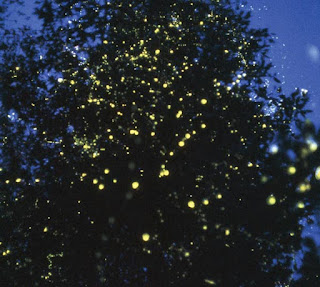 Last week, I was walking my dog at twilight. There is a huge tree behind my yard, which stood silhouetted against the rapidly dusking sky. As I watched, the entire tree sparkled. Hundreds of fireflies swarmed around every branch, shining for a moment, before darting somewhere new. My camera was inside, and even my phone was charging (the pic above isn't the tree, I borrowed a different pic from the internet). With no way to record such an image, I simply stared. Glowing dots dancing and flying around a shadowy mass of tangled branches. Fairies flying around a giant? Magic sparkling around a void?

I looked at the top of the tree, and saw something spewing from the tree's crown. I thought, perhaps, the tree was smoking. These tiny sparks flew upward, with clouds of smoke wafting away. After a moment of confusion, I realized what the dark swirls were. Dozens and dozens of bats circled the tree, perhaps planning to eat some of the fireflies. The effect was pure magic. Sparkles below, a shadow behind, and waves of winged smoke circling above.

When I returned inside, I instantly dove into my writing.

What sights in nature have inspired you lately?

As an acting and theatre teacher, I spend a lot of time working with young actors on discovering their characters' targets.

Depending on which acting methodology a person uses, they might refer to these as various things. A target encompasses a character's objective, their goal, and relates to their superobjective. I like the term target, first introduced to me in Declan Donellan's "The Actor and the Target" because it provides a concrete image of what you're aiming for when onstage. I strongly encourage all my actors to always have a specific target in mind. Acting is about doing, so every time an actor is onstage, there is something that they want, a target the character is working towards. For example, Romeo's target at the beginning of Romeo and Juliet might be relief, he vents to his friends about his girl problems. Later, his target becomes Juliet herself. 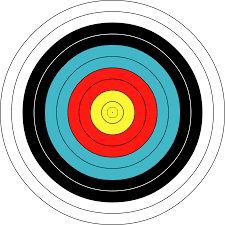 Thinking about targets is especially useful as a writer. Every writer has strengths and weaknesses. Personally, one of my greatest strengths tends to be creating memorable environments and locations. I can envision drastic, imaginative settings, and describe them well. However, setting is only one part of a story. One thing I've been doing lately, is when I'm crafting a scene I go through and take some time to check every single character's target. 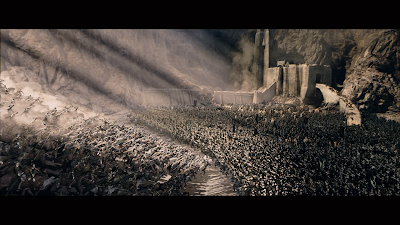 Even in a battle scene with hundreds of characters, every single figure has their own unique target. Every one wants something, and will go towards that goal until they get it, or their target shifts. Characters can share targets, but I find it helpful to think of each character as an individual who wants specific, different things. One figure in a battle scene might fight for revenge, another to prove himself to a parent, and another for money. But they're all fighting on the same side.

Go through whatever you're working on. Do you know your main character's target on every page? Do you know the targets of every minor and background character? Try adding targets to make your writing more detailed.

An Awesome End to Crazy May

My wife and I have been referring to May as "Crazy May." During the entire month, we didn't have a single day off, taking every weekend to do something from baby showers to our friends' wedding, and everything in between.  I ended "Crazy May" in an exhausting, but extremely awesome way, at AwesomeCon. 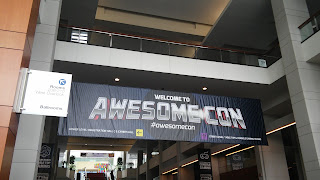 AwesomeCon is a sci-fi/fantasy/comic convention in Washington DC.  It's a relatively young con, only its sixth year or so, but was still very large.  The convention took over the entire convention center, with panels, a starship simulator, gaming rooms (both tabletop and video games) and more upstairs.  And then in the basement-like downstairs, there were hundreds of exhibitors and artists, including myself. 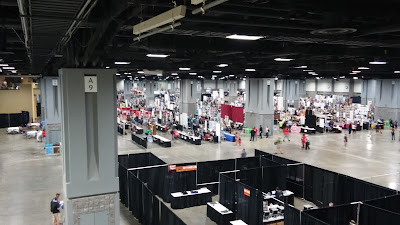 This is the view coming down the escalator of  my side of Artist's Alley.  There were celebrities to the right of the open area, mostly sci-fi/fantasy stars like William Shatner, George Takei, Sean Astin, and Arthur Darvill, just to name a few. To the left of Artist's Alley were the high-budget exhibitors with elaborate displays of merchandise, electronics, and more. Everything from Books-A-Million, Hollywood mask makers, to the Washington Nationals baseball team. There were hundreds of artists and exhibitors, although only four authors of books (non comic-books), including myself. 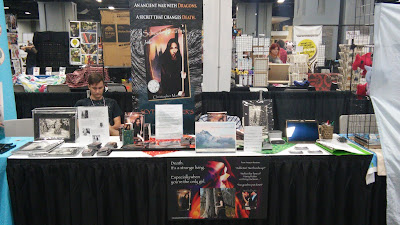 I had a helper come each day.  Above is my booth, before the con opened on Saturday. That's my cousin, who helped me that day.  The event was exhausting. Three days of promotion, talking to guests (the overwhelming majority of whom were in fantastic costumes), and doing my best to talk up the books. My helper on the final day was my wife Rachel. To make it even more stressful, Saturday was our first anniversary. I felt bad spending the day at the con, but we did go out for dinner and dessert following the event that night. 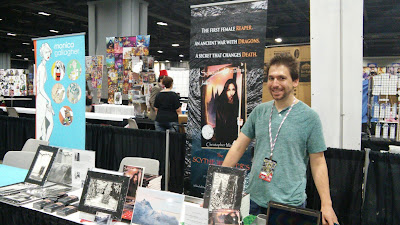 Overall I sold 50 books, and passed out promotional items including postcards, brochures and bookmarks to hundreds of others.  I had three art prints for sale, inspired by the novels, and many people commented that the prints helped them want to read the novels.  I was very happy with the event, and definitely plan to do more cons in the future.

Posted by Unknown at 9:39 AM No comments: