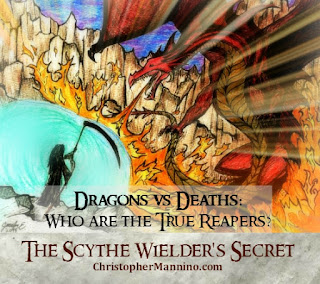 Susan Sarnio made a choice, and will spend the rest of her life as the only female Death.  Last year she was bullied and ostracized. Now, to her complete bewilderment, four Deaths vie for her affection. Yet, something is terribly wrong at the College of Deaths. When a ship carrying scythe metal is attacked, many blame the newly-freed Elementals, but Susan knows the Elementals are innocent.

Shadows from the distant past come to light. Dragons circle the horizon, blood spills, and nothing is what it seems. Susan and her friends struggle to stop a war. They search for the fabled First Scythe, hoping to sway the balance, but who is the true enemy? 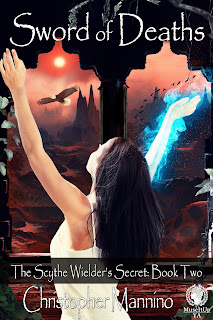 SWORD OF DEATHS, the second novel in the critically acclaimed YA Fantasy trilogy "The Scythe Wielder's Secret," is now available from MuseItUp Publishing in both ebook and paperback formats. In SWORD OF DEATHS, Mannino delves deeper into the world and characters introduced in the first novel. The novel is told from three rotating points-of-view, and for the first time, the conflict with Dragons is fully realized. The style becomes darker, and for more epic, as the series moves towards a momentous climax in the final book DAUGHTER OF DEATHS. 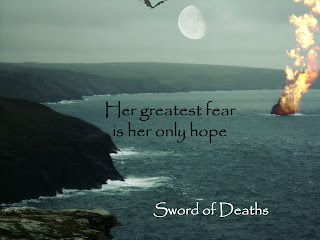 Here is an excerpt of this exciting novel:

Frank started to speak when a deafening shriek pierced the woods. They exchanged a silent acknowledgement, and crept to the side of the boulder.
“We might be able to hide beneath the stone,” Frank told Michi. He used his mind, grazing the power without diving into its depths.
The shriek screamed through the forest. The Elementals huddled on the rock’s edge, grasping for a crevice. Frank reached into his pocket and clutched the hilt of Rayn’s dagger. Tingles of warm energy coursed through his skin, rippling in waves from the mortamant blade.
A third scream blasted leaves to the ground. The forest floor trembled and trees quivered in the face of the Dragon’s fury.
“Something’s changed,” said Michi. “He knows we’re here.”
“Don’t be ridiculous,” said Frank. For a moment the forest quieted.
Crash!
The canopy overhead tumbled down, trees snapping in half. A smell of sulfur choked Frank. A blast of heat swept through the forest. White-hot flames engulfed the woods, disintegrating trunks and leaves in a conflagration. Fire rushed around them like a tidal wave against a beach. The boulder protected their backs, yet even the stone grew hot. Smoke stung his eyes like acid.
Frank pulled out the dagger. The Dragon’s scales covered its entire body. He’d never get close enough to draw blood. Yet, one nick of his own blood and he’d be home.
The Dragon’s blast ceased. So much destruction in a single blast.How did the Deaths ever defeat creatures like this? Acrid smoke billowed around the ashen ruins of trees. A wide swath of forest had been obliterated.
“Hold my hand,” he said. The boulder radiated heat behind them like coal in a furnace. “I’m going to bring us back to the College.”
“Wait. I’ve used my power,” said Michi. “It’s two against one, we should fight.”
“Fight a Dragon? Are you insane?”

WHAT PEOPLE SAY ABOUT THE SERIES SO FAR
(Praise for SCHOOL OF DEATHS: The Scythe Wielder's Secret Book One)

"Not just a book for young adults, but an imaginative read for everyone who likes something a little bit different. 5 Stars!" - Reader's Favorite

"With a well-developed setting, strong characters, a fairly fast moving plot, and snappy dialogue, this novel should keep readers engaged from the beginning to the end. Five Stars." - BookBreeze Magazine

"Let's start with one simple statement: Wow!  This book, the characters and the world created by Mannino is absolutely spectacular."  -Kay, GoodReads Review

"This book's world is brilliant, and the author's creativity is more than amazing and the way he conveyed his imagination was just stunning."  -OnlineBookClub 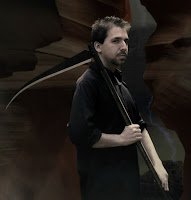 Christopher Mannino’s life is best described as an unending creative outlet.  He teaches high school theatre in Greenbelt, Maryland.  In addition to his daily drama classes, he runs several after-school performance/production drama groups.  He spends his summers writing and singing.  Mannino holds a Master of Arts in Theatre Education from Catholic University, and has studied mythology and literature both in America and at Oxford University.  His work with young people helped inspire him to write young adult fantasy, although it was his love of reading that truly brought his writing to life.

Mannino is currently completing The Scythe Wielder's Secret series and is working on several adult novels.

Learn more about Mannino and his novels, including trailers and purchase links at www.ChristopherMannino.com
Posted by Unknown at 7:00 AM